The police attacked the farewell ceremony that was meant to be held in Gazi neighbourhood before sending the body of İbrahim Gökçek, bassist of Grup Yorum, to Kayseri. Gökçek’s parents were also stopped at the entrance of the Djemevi for a criminal record check 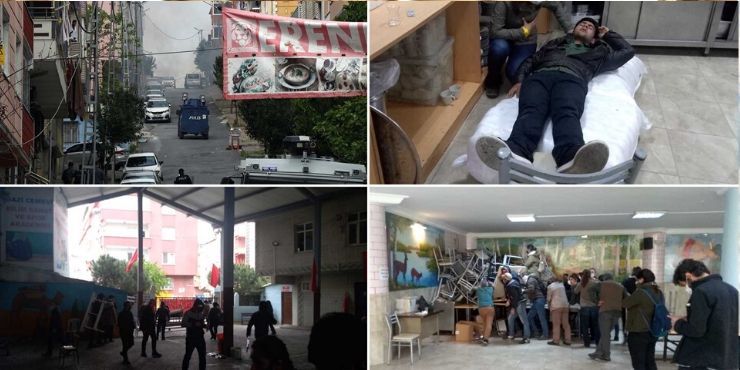 The ceremony which was intended to take place at the Gazi Neighbourhood Djemevi before the body of İbrahim Gökçek, Grup Yorum member who had abandoned his hunger strike on its 323rd day yet passed away the following day at the hospital, was sent off to his hometown Kayseri was obstructed by the police. Firing gas bombs and rubber bullets to participants of the ceremony, the police also placed some people in detention.

According to the report of the Mezopotamya News Agency, the police surrounded Gazi Djemevi as people intended to organise a march for Gökçek. While anti-riot cannon vehicles were positioned at both entrances of the Djemevi, the roads in the vicinity were blocked by the police. With its entrance and exit points closed off, no one barring a small group of people and members of the press who had arrived earlier in the morning were allowed into the djemevi.

CRIMINAL RECORD CHECK FOR THE PARENTS

BODY TAKEN OUT OF THE CITY

Those who were affected by the gas fire took refuge in the Djemevi and shut its doors. Among those trapped inside were also Mezopotamya News Agency reporters Erdoğan Alayumat, İdris Sayılgan who were following up the news, and Serdal Işık, ETHA editor.

Not allowing the ceremony in the Gazi Neighbourhood Djemevi, police officers took Gökçek’s body from the morgue and transferred it to the Mehmetçik Foundation, located out of the city. It was announced that the body would be delivered to Gökçek’s family from here.