Naci İnci, who was assigned as the rector of Boğaziçi University by the President of Turkey and his administration announced that the classes of Seda Binbaşgil, who has been teaching jazz for 16 years in the university, were abolished just before the start of the fall semester 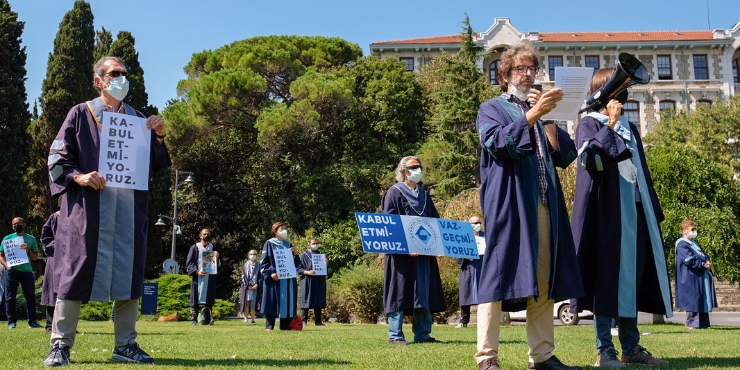 Assigned as a trustee rector to the Boğaziçi University by the President Recep Tayyip Erdoğan on January 2, 2021, Melih Bulu was discharged on July 15, 2021 by a Presidential Decree.  Assigned first by proxy and then officially, the President Prof. Dr. Mehmet Naci İnci and his administration first abolished the classes of faculty member Feyzi Erçin and then announced that the faculty member Can Candan and Cemre Baytok, the Coordinator of Commission on Prevention of Sexual Harassment (CİTÖK), were both discharged.

Finally, the trustee rector and his administration announced the abolishment of the classes of Seda Binbaşgil, who has been teaching jazz in the university for 16 years at the Western Languages and Literatures Department.

“The assigned administration canceled the classes of Seda Binbaşgil, who is one of the most competent and skillful academic members and has been teaching jazz at Boğaziçi for sixteen years, just before the start of the new academic year. As you all know, the classes of Can Candan and Feyzi Erçin, who have added value to our University and made great contributions to the cultural developments of our students and to the identity of our institution through the music and cinema classes they teach, were abolished by the assigned president Naci İnci in an arbitrary, unfair, and illegal manner.  Through these abolishment decisions taken one after another, the Culture and Art classes having being taught for many years under the Western Languages and Literatures Department and Movie Studies Certificate Programs are disrupted and Boğaziçi students are deprived of such significant privileges that bring them not only professional competence but also world knowledge. It is unacceptable under any circumstances that our experienced professors, who have good reputations in their own fields, are dismissed from their positions at the University.

Throughout its history, Boğaziçi University has encouraged and invited reputable figures in their fields to teach in areas where they are competent with merit-based criteria. These figures and courses have been one of the greatest diversities of our University. Since January 2, we do not accept this systematic massacre directed at culture and art courses by Naci Inci, the assigned president, who has been part of an administration that attacks all the values that make Boğaziçi University reputable and attractive and rejected by 95% of academics through votes of dissent. We demand that this standardizing stance threatening Boğaziçi University’s sense of education that attaches great importance to versatility, creativity and interdisciplinary interaction be withdrawn and our distinguished professors Can Candan, Feyzi Erçin and Seda Binbaşgil return to their classes.

The musicians are speaking (II): “It will take time to get back to former state”

‘Genç Hayat’ (‘Young Life’) newspaper was not accepted into a university