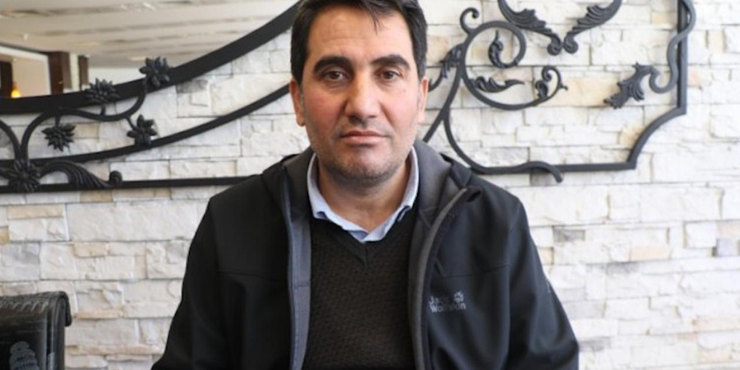 Veysi Ermiş, a Kurdish musician and artist from the Mesopotamia Cultural Center (MKM), was sentenced to 1 year, 6 months, and 20 days in imprisonment for making organizational propaganda with the expressions “Kurdistan” and “guerrilla” in his songs. The President of the Court postponed the penalty by saying, “We forgive you for once since your criminal registry is clean.”

According to the news of the Mezopotamya Agency (MA), the trial of Veysi Ermiş at the 27th Istanbul High Criminal Court started on 11 November 2021.  Ermiş and his attorney-at-law İrfan Arasan were present at the hearing and Ermiş was sentenced to 1 year, 6 months and 20 days in imprisonment for the words “guerrilla” and “Kurdistan” used in the songs.

The court asked Ermiş if he attended the Newroz celebrations and who the “Commander Egît” mentioned in one of his songs was. Stating that he participated in Newroz and that it was not a crime, Ermiş noted that he was on trial for the banners and posters that were opened in the arena instead of the songs he sang during Newroz.

In his defense, attorney-at-law Arasan said, “We do not accept the charges. There is an allegation that the expression ‘Kurdistan’ is a crime and that it creates propaganda in favor of the PKK. Kurdistan has existed for thousands of years. It was always used before the PKK. It does not constitute any crime. There are also accusations for posters that were put up at rallies where he attended and sang. These cannot be included in charges.”

Underlining that the expression “Kurdistan” is not a crime, Arasan said that President Tayyip Erdoğan was greeted with the song “Batmanê Batmanê” during his recent visit to Batman, and the phrase “Batman is the rose of Kurdistan” is used in the song.

The President of the Court used the following expressions while announcing the decision: “For once, we forgive you since your registry is clean. When we say we forgive, we postpone the penalty. Kurdish songs can be sung. But if you say guerrilla, you praise the PKK. Be aware of it, okay? Singing Kurdish songs is not forbidden. There is even a channel called TRT ŞEŞ. We do not accept Guerrilla, Kurdistan within the borders of Turkey. You can use these words if it is in Iraq. You cannot do this within the borders of the National Pact. Now, you can go.”