Video activist and documentary filmmaker Oktay Ince was sued for “defamation of the President” and in the third hearing of the lawsuit, the court sentenced him to 1 year 2 months 17 days of prison. The announcement of the verdict was deferred 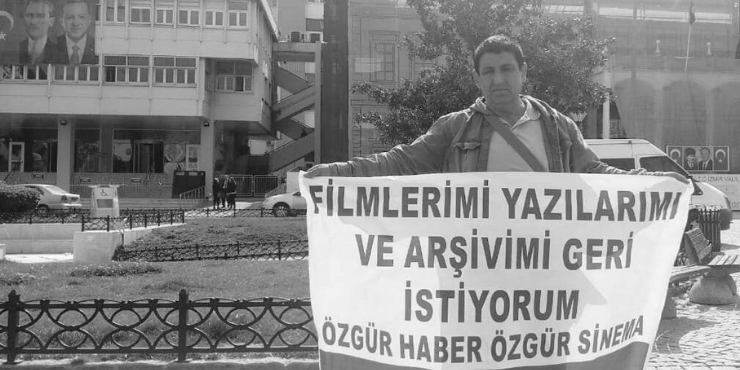 The third hearing of the lawsuit filed against video activist and documentary filmmaker Oktay Ince for his social media posts since 2018 due to “defamation of the President” was held on 30 November at Kemalpaşa 1st Penal Court of First Instance. The court sentenced Ince to 1 year 2 months 17 days of imprisonment with the charge of “defamation of the President” and the announcement of the verdict was deferred.

INCE: THE POLICE WERE AUTHORIZED TO TURN THE ‘CRIMINALS’ THEY ALLEGEDLY CAUGHT TO PROSECUTION AND FILE LAWSUITS BASED ON THEIR VIRTUAL PATROLS’

We asked for the opinion of Oktay Ince regarding this issue and he noted that he did not want to address the charge of “defamation of the President” on its own as the issue should be examined from a much wider perspective and added:

“This issue should be addressed by focusing on the fact that after the government acquired 99% of the media outlets in Turkey and realized that the only medium the opposition or anyone objecting to something could use was social media or the Internet, it initiated operations for preventing the right to voice and the right of freedom of speech for the last 4 to 5 years over social media. These operations were started for fabricating crimes by investigating current or past social media posts of people and for suppressing the right of thought and freedom of expression. In line with this, the police were authorized to carry out ‘virtual patrols’ on social media, independent of the prosecution – without the order or knowledge of the prosecution – and to turn the ‘criminal’s they allegedly caught to prosecution and file charges.

Me being charged with this ‘crime’ is again related to silencing. As you have reported on your platform, my archive was seized and when I could not legally get my archive back, I started protesting in 2019. On 11 April 2019, the police carried out a ‘virtual patrol’ and pressed charges with the allegation of ‘defamation of the President’ to prevent my struggle for my archives based on social media accounts claimed to belong to me. Since we deem these charges as a political attack, not legal, we followed a suitable defense line. We thought ‘How can we pursue the prosecutions as a part of the resistance, freedom of thought and speech, and creative thinking.’ For example, in addition to written and verbal defenses, we presented a 56-minute defense video as a third type of defense to the court committee.”

Ince noted that the courts were under heavy pressure regarding the “defamation of the President” lawsuits and that the number of defamation lawsuits that are concluded without any punishment is very few. Ince added:

“In our lawsuit, the General Directorate of Penal Affairs and İzmir Prosecution Office were constantly in contact with the court and asked the result of the lawsuit. In the last hearing, we found out that the website report of the police was written as follows: ‘These are things that everyone on the Internet can write. Additional evidence is required for punishment.’ While the prosecution office did not present any additional evidence, the court gave this sentence based on this report issued by the police, which was against the constitution. The final decision, etc. of the Constitutional Court (AYM) and European Court of Human Rights were not effective when the decision was passed. However, since the judges are under heavy pressure, they deferred the announcement of the verdict in order to alleviate the sentence. Thus, the lawsuit ended with a seemingly “alleviating” verdict aimed at oppressing us for the next five years.

What would trouble me here the most would be paying money to the lawyers of the Presidency, who just submitted a written defense to the court, who never defended their clients at the hearings, or who earned lots of money in this manner. We will do anything in our power not to pay such funds and we will turn this into a process of resistance.

At this point, not the lawyers or the police but the Presidency carries out ‘virtual patrols’ by its own teams and calls the prosecution office directly to file a lawsuit for the tweets they perceive as defamation – this actually happened in İzmir. In our defense video we claimed that the President constantly defames people and therefore, people to defame him would be a legitimate defense or ‘return of the defamation’.