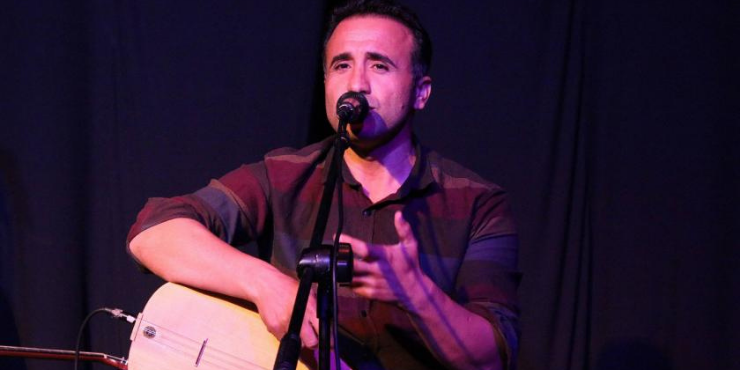 Keçiören Municipality in Ankara canceled Kurdish artist Mem Ararat’s concert to be held on 4 December 2021 at Neşet Ertaş Culture Center. In the announcement made over the artist Mem Ararat’s social media account, he noted that the concert was canceled by the municipality governed by AKP. Ararat used the following words in his post:

“As you know, I was to perform at Neşet Ertaş Culture Center of Keçiören Municipality, Ankara on 4 December 2021. Our friends responsible from the organization (Ziz Müzik Organizasyon) filed all the official applications and the contract with the hall was signed and the fee was paid. The tickets also went on sale over Biletix.  As far as I know, the majority of the tickets were sold. Flights and hotels of all musicians were booked.

Tonight, an authority of the municipality called Ziz Müzik and said: “We did not know Kurdish music was to be played at the concert. We, as Keçiören Municipality, cannot allow this and therefore, we are unilaterally terminating the contract.” This is why our concert in Ankara is canceled. This obviously is a hate crime. I regretfully condemn Keçiören Municipality for this hate crime against Kurdish. And we will continue singing our songs altogether and again in Kurdish and in all languages and dialects…

In order to prevent unjust treatment, I kindly request our friends who purchased tickets to return these tickets via Biletix.

To the kind information of our friends… Mem”

According to the news of Serkan Alan from  Gazete Duvar, the Culture Manager of Keçiören Municipality, Buket Taker said that Neşet Ertaş Culture Center was hired by the organization company for the play of Mehmet Esen. Taker said that when they learned that Mem Ararat was to give a concert the contract was terminated due to “misinformation” and added:

“Our halls are hired in two ways. One is for commercial purposes and the other for helping foundations or associations. This production company called our friend who rents the halls on the phone and said that they want to hire the hall for the play of valuable theater actor Mehmet Esen’s show. This is a standard procedure and our friend looked up who Mehmet Esen was. The person calling also said, “It will be like a concert.” Our friend thought this would be like a musical. They manipulated our friend. Our friend agreed with the date and time and rented out the hall. Then someone called the municipality and said “Mem Ararat is to perform at Neşet Ertaş Culture Center. What is the address? Can we come?” Then, our friend who rented the hall said, “We don’t have such a concert. We gave the hall to Mehmet Esen.” Then, our friend got on the website of Biletix and turns out the name of the concert and the person we rented the hall to are different. That is why the contract is terminated unilaterally. This does not have anything to do with Kurdish, Arabic or Turkish. This is our routine procedure for misrepresentation. We carry this out when we do not have information on the content. There is no problem with the content.”

The news also notes that it was reminded to Taker that the real name of Mem Ararat is Mehmet Esen and Taker said, “When you search Mehmet Esen, the theater actor Mehmet Esen comes up. They have to give the stage name. Our friends would not know that. Then someone calls and says “We are going to Mem Ararat’s concert” and we say, “No, we gave the hall to Mehmet Esen.” I wish they had made the correction. There is a conscious manipulation here. His real name and stage name are different. Hiring should be made under the stage name. Many artists have stage names and they are the ones you should mention when you call. They had to tell us the stage name. We rent the hall out to all kinds of artists.” The municipality officials noted that they will be pressing charges.

URFA BAR: “IT IS EVIDENT THAT THIS STANCE TAKES COURAGE FROM THOSE WHO DEFINE THE KURDISH LANGUAGE AS AN ‘UNKNOWN’ LANGUAGE”

“To the Attention of the Press and Public Opinion,

An official of the municipality said “We did not know that Kurdish songs will be played at the concert. We cannot allow this as Keçiören Municipality and that is why we are unilaterally canceling the concert” about the concert to be held by Ziz Müzik Organizasyon at Neşet Ertaş Culture Center of Ankara Keçiören Municipality on 4 December 2021. It is evident that this stance takes courage from those who define the Kurdish language as an ‘unknown’ language. We will take legal action against the hatred against the Kurdish language and Kurdish society and against provocation of hostility or contempt and we will be following the process.