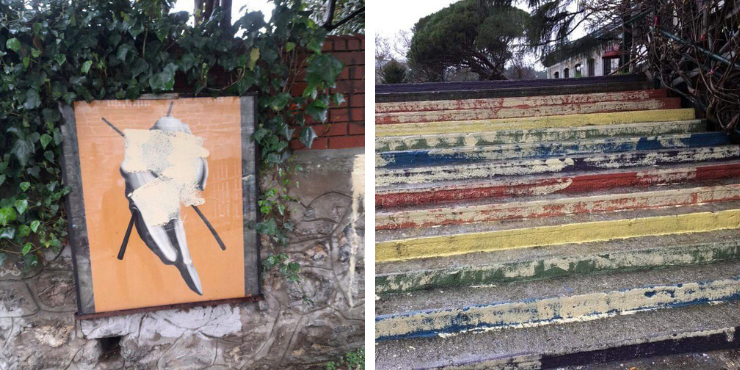 Bogazici University students continue their protest against Prof.  Melih Bulu’s appointment as rector by the President’s decision, and in this sense, against the damage to the free and democratic environment of their universities. Continuing an exhibition that they say is about the essence of their resistance in the shadow of investigations, police violence, detentions, and arrests, the students always emphasize that cultural studies are part of protecting the atmosphere of Bogazici University. The cultural and artistic insistence of the students, who were targeted for a work featured in the exhibition they opened within the scope of the resistance, was once again subjected to censorship.

The Twitter account named “Bogazici Dayanışma [Eng:Bogazici Solidarity]”, where students announce all kinds of news about the resistance to the public at first hand, shared the following information last night:

“The stairs we painted in rainbow colors and a painting belonging to the Fine Arts Club were painted over today. We are here with our colors, we are not going anywhere!”

The Boun Exhibition team, whom we talked to later, stated that an artwork, which has been on display on the campus for years and belonging to a successful artist from Bogazici named Halil Ege Doğramacı, was painted last night. The team mentioned that, as can be seen in the message they sent, the stairs they painted in rainbow colors were almost blackened with paint.

Students also said that another artwork of the same artist was smashed into two pieces and thrown aside while the school was closed during the pandemic this year.
It was also emphasized that the artist whose works were destroyed and censored was the president of the Fine Arts Club for a long time.

Artist Halil Doğramacı, whose painting, which has been on display at Bogazici University campus for years, was recently vandalized, announced on his Instagram account that he will sell his artwork to the highest bidder and donate the money received from this sale to the LGBTI + and women’s associations.

Tonight, we entered Bogazici University, which is under blockade, and removed this painting, which has not been damaged even by a scratch since 2018, from its frame.
I say this to those who defame this painting at night, those who censor it, and those who rejoice at what happened:

You made this painting famous in one day and if I can sell this painting thanks to you, I will use all the money received from this sale to cooperate with the people you hate.

With Transgender People
With Lesbians
With Bisexuals
With those who resist

I will donate all of the money from the highest bid to be received in 5 days, starting from today, to LGBTI + and women’s associations.
So much so that we will wash your mess with rainbows and goodness!”

Bogazici students had already announced that some of their works at the exhibition had disappeared before their work was targeted, and they had already pointed out that there was an intervention.

Censor on festival posters at university