While the Governorship of Istanbul announced that all campaigns for saying “No to War” were banned, it also claimed that such actions and activities were “threatening social peace”. 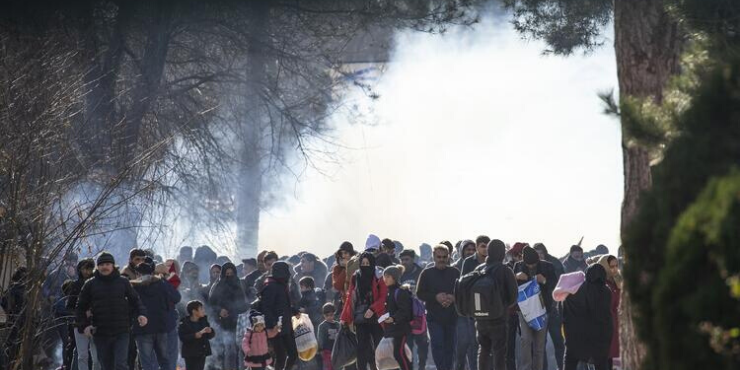 The Governorship of Istanbul announced that doing campaigns ‘against war’ was banned since they ‘threaten peace’.

In Idlib, 33 members of the Turkish Armed Forces (TAF) lost their lives as a result of an airstrike. After the airstrike, first, the internet access was blocked, then the 1st Criminal Judge in Ankara banned sharing photos and videos of destructed vehicles of TAF and TAF vehicles in the hands of FSA. Following these prohibitions and blockings, Pazarkule Border Gate was opened for Syrians to pass the border for leaving the country. Reporters Without Borders (RSF) announced that nine journalists, including journalists working in the international press, were detained in Edirne. Detention of refugees and journalists was brought to the agenda of the parliament by the opposition party HDP.

Regarding these events, many sections of society criticized the foreign policy of the government and called for “ending the war”. The Governorship of Istanbul almost declared a state of emergency against those who said: “no to war”.

The Governorship announced its comprehensive ban decision that will last until 10 March from its official website with these words:

“In such a sensitive period when we have martyrs and veterans, it has been considered that verbal and physical incidents of provocative nature could arise between our citizens and the groups/persons who will hold events and demonstrations such as meetings, marches, press statements, petitions, open stands/tents, distribute leaflets and pamphlets, etc. in the name of ‘No to War’, etc., which can jeopardize the maintenance of public order, prevention of crimes and protection of others’ rights and freedoms.

Within this context, to ensure peace and security, maintain public order, preventing committal of crimes, protecting the rights and freedoms of others and preventing deplorable and provocative incidents within the borders of our province, the events such as meetings and protest marches, press statements, opening of stands, collecting signatures, distributing leaflets, pamphlets, etc. to criticize or create public opinion to call for an end to the military operations conducted by our Turkish Armed Forces in Syria have been banned for ten (10) days as od March 1 at 00.01 until March 10 at 11.59 p.m. per Articles 11/A and 11/C of the Law no. 5442 on Provincial Administration and the Articles 17 and 19 of the Law no. 2911 on Meetings and Demonstrations. “

It is noteworthy that the ban decision ends on 10 March. just after 8 March International Women’s Day, when actions and activities would take place in Istanbul.