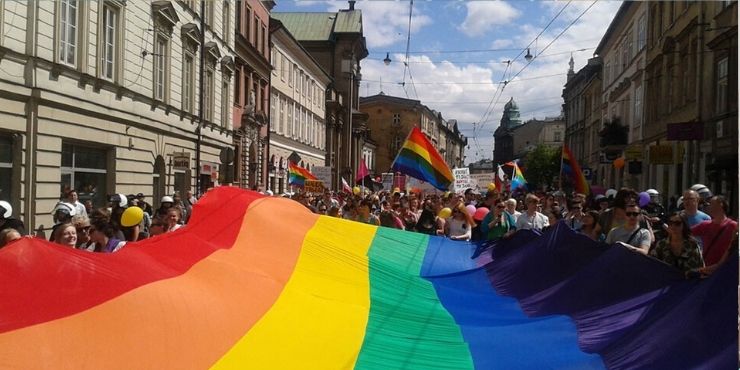 It is clear that the LGBTI+ movement and LGBTI+ rights are among the hotly debated issues in a political landscape that is getting more and more complex each passing day in Turkey. Propelled by the momentum of the Pride Month, celebrated for the first time entirely online due to the COVID-19 pandemic, statements came one after another from high-level public officials and politicians about LGBTI+ people. Although these statements help mainstream the LGBTI+ movement within the political domain and foster public discussion about LGBTI+ people, it is undeniable that the political atmosphere has a direct impact on the lives of the LGBTI+ people.

As a clear indication of this situation; in the 45 days following the statements of Ali Erbaş, Head of the Religious Affairs Administration, during his Friday sermon on 24 April 2020, where he put LGBTI+ people and people with HIV in the line of fire, there was a 100% increase in the number of applications to the SPoD LGBTI+ Hotline about cases of discrimination and violence based on gender identity and sexual orientation as attested by SPoD’s Pandemic Report: LGBTI+ People in the first three months of COVID-19.[1] The report specifically underlines that there was an increase in the number of violence cases after the statements of hate speech and the counselees felt less safe.

Following Erbaş’s remarks, public officials posted at various levels and working in a range of domains, and politicians continued to make statements about the LGBTI+ people. Some of the most prominent examples were: Istanbul Mayor Ekrem İmamoğlu saying the public was not ready for the legalization of same-sex marriages,[2]Turkish Red Crescent President Kerem Kınık accusing LGBTI+ people of pedophilia, [3]Communications Director of the Presidency Fahrettin Altun supporting Kınık’s statements and adding that “LGBT propaganda” posed a significant threat to freedom of expression,[4]President and AKP Leader Recep Tayyip Erdoğan remarking that LGBTI+ people were deviants and asking the people to take a stance, [5]İYİ Party Leader Meral Akşener stating that she would not want her child to be gay. [6] These are only some of the most notable of such recent statements. Even on the day of this writing, AKP Deputy Chairman Mahir Ünal made a statement saying that they were against the imposition of homosexuality.[7] It would not be amiss to predict that statements regarding LGBTI+ people will continue to occupy some space in public discussion for some time to come.

These statements coming from top public officials and politicians, more examples of which can be enumerated, undoubtedly carry significant weight and clearly showcase the state of affairs about Turkey’s LGBTI+ policies.[8] The afore-mentioned statements and the sort of approach espoused by several other public officials and instruments of the state should be assessed from the perspective of the national and international human rights law regime of which Turkey is a part.

That is why the statements and political positions of high-level public officials and politicians about human rights and especially about disadvantaged groups must be addressed from the standpoint of fundamental rights and freedoms, and the public oversight to be ensured in this respect should always be allowed to thrive for a democratic discussion.

First, we should have a look at the general outline of Turkey’s responsibilities vis-à-vis human rights. Most fundamentally, Article 2 of the Turkish Constitution titled Characteristics of the Republic states that the Republic of Turkey respects human rights, and respect for human rights is laid down as one of the fundamental raisons d’être of the state. Furthermore, Article 10 of the Constitution titled Equality before the Law, although not explicitly mentioning sexual orientation and gender identity, states in an open-ended manner that everyone is equal before the law without distinction as to language, race, colour, sex, political opinion, philosophical belief, religion, and sect, or any such grounds. The above-mentioned concept of equality is not solely confined to equality in a legal sense.  In close connection to the concept of equality before the law, the prohibition of discrimination, enshrined in the European Convention on Human Rights (“ECHR” or “the Convention”), to which Turkey is a party and which is one of the most fundamental normative sources about human rights, is inherent in the understanding of equality before the law. In this respect, it should also be noted that prohibition of discrimination must be interpreted to include positive liabilities to eliminate direct, indirect, and all other forms of discrimination with all the shapes it takes in practical terms and abolish systemic and systematic inequality as well as prevent existing inequalities from gaining ground.

Article 5 of the Constitution titled Fundamental aims and duties of the State states “The fundamental aims and duties of the State are […] to provide the conditions required for the development of the individual’s material and spiritual existence” and the individual’s right to material and spiritual development, considered to be one of the fundamental aims of the state, is also enshrined as a fundamental right in Article 17 of the Constitution titled Personal inviolability, corporeal and spiritual existence of the individual. Material and spiritual development is regarded as parallel to “private life” by the European Court of Human Rights (“ECtHR” or “the Court”) within the ECHR regime. As the Convention is a living instrument, the concept of private life develops and expands day by day. Hence, sexual orientation, gender identity, sexual autonomy, sexual integrity, and sexual expression of a person are all strictly protected by the human rights regime in line with both the Constitution and the Convention.

Finally, it must be stated that said constitutional liabilities, in line with Article 11 titled Supremacy and binding force of the Constitution, are binding upon legislative, executive and judicial organs, and administrative authorities and other institutions and individuals. Therefore, the framework for LGBTI+ rights does not only encompass the enactment of certain regulations or passing of judiciary rulings but also imposes a constitutional responsibility in terms of adopting a holistic approach in statements made, political stances and positions taken, and generally in relation to the space of freedom made available to LGBTI+ people.

This, taken from a wider perspective, can also be regarded from the standpoint of one of the basic principles of human rights law, which is the recognition-protection-observance liabilities. The human rights law regime set out by the Constitution and the local legislation as well as the United Nations and Organization for Security and Co-operation in Europe among others envisions that human rights do not remain simply on paper, are protected by all legislative, executive, and judiciary organs, that holistic policies are developed about human rights, and complete protection is ensured for human rights as they develop and affect all areas of life on a daily basis.

Indeed, a quick look at the judgments of the Court of Human Rights about top public officials and politicians’ statements shows that this situation is also established in the Erbakan v. Turkey judgment, one of the first such rulings to be delivered. The statements that are the subject of the judgment relate to a speech Necmettin Erbakan made about the Welfare Party (Refah Partisi) in which he was alleged to form a political line on the basis of religious affiliation, for which criminal proceedings had been launched against him for inciting the people to hatred and hostility. The Court, in this judgment, states that, as a general principle, in a democratic society,  “all forms of expression inciting hatred or even branding hatred as legitimate, including intolerance, must be sanctioned and even prevented, using the formalities, restrictions, or sanctions in place”, proportionate to the legitimate aims pursued.[11] Because there was no “present risk” and no “imminent danger” following the speech of Erbakan and because criminal proceedings had been launched against him four years and five months after his speech, the Court decided that freedom of expression had been violated in this case. Despite that, the above-mentioned judgment is highly important for underlining the accountability that high-level public officials and politicians have as regards their statements.

Another important decision that should be mentioned as regards hate speech that might cause persons to be humiliated and ostracized for their identities, foster stereotypes for such identities, and put in the line of fire and criminalize such identities within society is the Vejdeland and Others v. Sweden judgment.[12] The case that was the subject of the judgment was about leaflets being distributed in a high school which claimed that “homosexuality is a deviant sexual proclivity” and “it is responsible for the spread of HIV/AIDS”. The applicants applied to the Court, arguing that their freedom of expression was violated in the criminal proceedings that ensued. The judgment stressed that “discrimination based on sexual orientation is as serious as discrimination based on race, origin or colour”,  and stating that “inciting to hatred does not necessarily entail a call for an act of violence, or other criminal acts”, argued that “attacks on persons committed by insulting, holding up to ridicule or slandering specific groups of the population can be sufficient for the authorities to favour combating racist speech in the face of freedom of expression exercised in an irresponsible manner”. The Court, therefore, found that freedom of expression had not been violated in the material application.[13] In this regard, the Court very clearly expressed that hate speech based on sexual orientation or gender identity cannot be regarded as falling under the protection of freedom of expression. There is no reason why these clear determinations about hate speech should not be upheld for top public officials and politicians in practice.

IN LIEU OF CONCLUSION

It is clear that the statements delivered by high-level public officials and politicians have important implications for the trajectory of politics that is currently being followed in the country. The influence and power enjoyed by the persons who have made the statements and the rate at which such statements spread and the range they reach as well as the outcomes they might engender mean that such statements cannot simply be regarded as a simple expression of opinion but that these persons can be liable for the effect of such statements in various aspects. Indeed, this point is propounded by the established case law of the ECtHR. Statements made specifically about human rights and the LGBTI+ people who are at the center of daily politics at the moment remind one of practices and policies about human rights and demand particular attention in light of utterances directly impacting the life of LGBTI+ people.

The fact that LGBTI+ rights are human rights has found itself a place in daily politics thanks to the intense efforts and perseverance of activists and civil society that have fought in this field for years to come. It is clear that the fight that is put up in line with human rights law for current statements about LGBTI+ people will be continued with the same resolve from now on.

[5] Presidency of the Republic of Turkey, “Türkiye, salgın sonrası yeniden şekillenecek dünyanın yıldız ülkelerinden biri olacak” (“Turkey will be one of the rising stars of the reshaped world following the pandemic”), 29 June 2020, Avilable at: https://www.tccb.gov.tr/haberler/410/120507/-turkiye-salgin-sonrasi-yeniden-sekillenecek-dunyanin-yildiz-ulkelerinden-biri-olacak-.

[6] Kaos GL, ““Çocuğumun böyle bir tercihte bulunmasını istemem ama tercihte bulunanı da dövmem”” (“I do not want my children to make such a preference but I would not reproach anyone for making that choice”), 3 July 2020, Available at: https://www.kaosgl.org/haber/cocugumun-boyle-bir-tercihte-bulunmasini-istemem-ama-tercihte-bulunani-da-dovmem.

For the Turkish translation of the judgment, see: https://www.kaosgl.org/haber/aihm-in-nefret-soylemi-karari-turkce-de

Posters with the term “LGBTIQA+” banned on campus