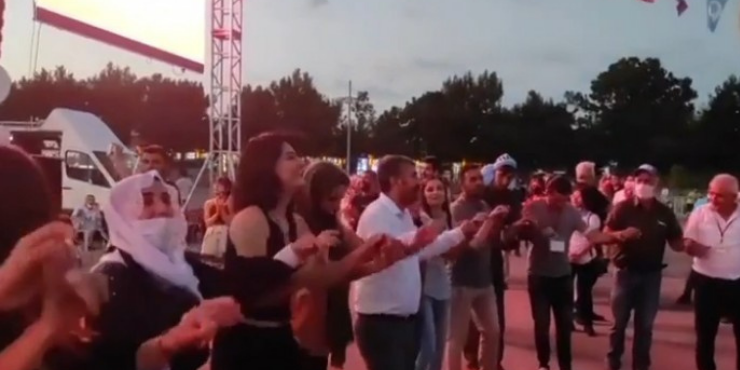 Public prosecutor of Batman opened an investigation for 13 people who were dancing along to Serhildan jiyane, a song by Şivan Perwer at a public demonstration on 14th August 2021 in the city.

Within the investigation by the public prosecutor on the demonstration, 13 people including the Batman Provincial Co-Presidents, Fatma Ablay and Ömer Kulpu, were called for an interrogation to the Provincial Directorate of Security.

According to the news by Mesopotamia Agency (MA), those called to the police office were told that “you were detected to dance along to a song called Serhildan jiyane (Living is Revolting) by Şivan Perwer that includes many organizational statements, and you are called for interrogation to the Department of Counterterrorism”.

Stating that the police officers seized the instruments of the artists on the demonstration day, Kulpu said that the artists took to the stage and sang their songs along with those coming to the demonstration. Kulpu expressed that Berxwedan jiyane by Şivan Perwer was also sung and “those now allowing the instruments and showing intolerance for the art now opened an investigation against the people singing and dancing along to the songs”.

Kulpu reacted on the issue as “Those who let Şivan Perwer take to the stage consider the song of Perwer a crime and open investigation today. They do not show tolerance to the language, dance, rhythm and applauses of the Kurdish people. Therefore, the investigation against us is tragicomic. We took our share in this century. These cases are for the grudge against us coming together with our people against all odds. As always, we will remain firm.”