Photographer and poet Mehmet Özer was given a prison sentence of 1 year and 3 months for sharing on his social media accounts the photographs belonging to the exhibition named 12 September Museum of Shame and the photographs he took at various demonstrations and memorials, on the grounds of “making propaganda in favour of terrorist organisation” 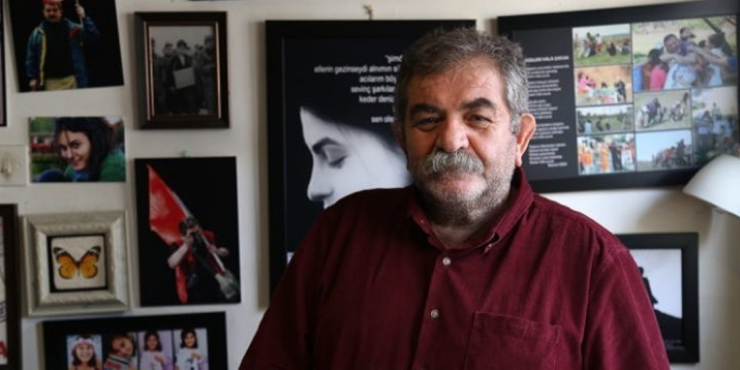 For sharing on his social media accounts the photographs belonging to the exhibition named 12 September Museum of Shame opened by 78’liler Federation and the photographs he took at various demonstrations and memorials, photographer and poet Mehmet Özer was given a prison sentence of 1 year and 3 months on the grounds of “making propaganda in favour of terrorist organisation”.

The sentence given to Özer during the verdict hearing realised today at Ankara 2nd High Criminal Court was postponed. Özer indicated that they will bring the case to appeal.

“A CASE DEVOID OF THE JUSTIFICATION REQUIRED FOR SENTENCING, LEGALLY SHORTCOMING AND WITHOUT GROUNDS”

Mehmet Özer, giving a speech to Susma Platform, indicated that the social media posts he made between the years 2010 and 2015 that were made subject to the case were investigated through a non-legal method and stated: “The Gendarmerie has sent this case to the prosecution, and instead the prosecution should have requested it initially. So, this is an investigation that was primarily initiated with legal shortcomings.”

Özer also stated that Ankara 2nd High Criminal Court had previously given acquittal decisions for cases with similar content, and thus this verdict contradicted with its previous standing.

Özer continued: “Actually I really did not anticipate such a result because the case was devoid of grounds, and the causes were not severe enough to be subject to any sentence. However, justice manifests in such weird ways.”

Özer talked on the 12 September Museum of Shame that had been the subject of his works during the period when he worked in an administrative capacity within Devrimci 78’liler Federation and been mentioned in the case, as follows: “This museum hosted an exhibition comprised of the photographs of intellectuals, scientists and artists who were killed, and gotten missing while prisoned or detained before and during the 1980 coup period. I was charged with aiding and abetting terrorist organisations because I shared the photographs in this exhibition.”

Other social media posts mad subject to the case were the photographs he took during the press statements, memorials, and demonstrations realised in Yüksel Avenue, Konur Street, and Kızılay.

Indicating that he has been taking photographs since 40 years ago and has been happy with witnessing the “others” and being their photographer, and he was penalized exactly for choosing this life and continued: “I am writing a history other than the formal history of this country. This is the informal history, the history of streets, of women, of LGBTI individuals, children, labourers, workers, and of peoples. I am trying to make apparent the injustice, the poverty, the othering in this country over the photographs I call visual text, in addition to words. What I do is actually a visual history telling. Visual text is my method of explaining my thoughts, sentiments, and living practices. Most of the work I create possesses the characteristic of news because I report a demonstration, an activity and a circumstance. And through this verdict of sentencing -and neither the length of sentence nor its postponement is of importance- my freedom of expressing thoughts and making news was penalised. This is what I oppose.”

Özer ended his statement with these words: “I hope that the justice system decides that expressing thoughts is not grounds for crime. I hope that the verdict comes out as “expressing thoughts does not constitute a crime” whether by word, by the practice of arts, by poems, stories, paintings or photographs. I hope that is decided upon that people may express their thought via any method of theirs –be it press statements, banners, placards, an action or artistic practice of their choice.”