The concert to be held at Bostancı Show Center on 16 October 2021 for the 30th anniversary of the foundation of Mesopotamia Culture Center, was banned by Kadıköy District Governorship 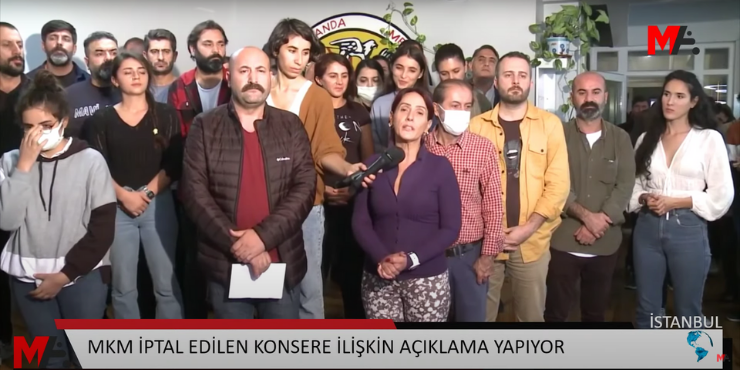 The 30th year concert to be held on 16 October 2021 at 18:00 pm in Bostancı Show Center organized by Mesopotamia Culture Center (MKM) titled Berbang (Dawn, daybreak) was banned by the Kadıköy District Governorship just a few hours before the event. MKM announced the District Governorship’s ban from its Twitter account in both Kurdish and Turkish with this tweet: “Our concert to celebrate the 30th year of our foundation was banned ‘on the grounds of national security, protecting the public order, possibility of commitment of a crime, endangering the rights and freedoms of others’ by the Kadıköy District despite the permission of the governorship days before!”

MKM ARTISTS: “MKM HAS NOT BACKED DOWN FOR 30 YEARS AND WILL NOT FROM NOW ON EITHER”

According to the news of Mesopotamia Agency (MA), the artists of MKM made a press release after the ban. Ömer Şahin, one of the artists noted that they have been struggling for the free art movement for 30 years and many centers have been closed in the past for many times and added: “Pressure, assimilation, and cultural genocide has never stopped and still continues. Those who turn a blind eye to the Kurdish nation are still in charge. Yesterday, they banned our traditional clothing and songs. Today, the same mentality banned our concert.”

Şahin, who stated that they have been preparing for the concert for two months and no adverse replies were given to them until the last day, said: “However, on the day of the concert they informed us on the phone that they are banning our concert ‘on the grounds of national security, protecting the public order, possibility of commitment of a crime, endangering the rights and freedoms of others’ due to People’s Democratic Party’s (HDP) post regarding the concert. Our friends who arrived in the district of Bostancı in the morning were interrupted. Our entry to the concert hall was prevented.”

Speaking after Şahin, the artist Nurcan Değirmenci indicated that they were faced with similar challenges and oppressions in every step of their 30-year journey in culture and arts. On the grounds of the ban Değirmenci said, “How are we to restrict a language and culture of a nation? We are astonished. This may happen today in Bostancı and then somewhere else tomorrow. MKM has not backed down from its 30-years struggle and will not from now on either.”

DEMONSTRATORS TAKEN INTO CUSTODY AT THE MKM CONCERT BAN PROTESTS

After the Kadıköy District Governorship banned the 30th-anniversary concert of MKM, the HDP Istanbul Youth Assembly and University Students of HDP arranged a protest against the ban on Istiklal Avenue. MKM announced from its Twitter account that some demonstrators were taken in custody.

The concert of Azis who was targeted by Yeni Akit newspaper, was cancelled