Adana Governor’s Office banned the Kurdish play ‘Tartuffe’, which would be staged on June 6 by Şanoya Bajêr a Amed ê (Amed City Theatre), without giving any reason. It was learned that Mersin Governorship gave permission for the same play first, but removed the permission given 20 hours before the play 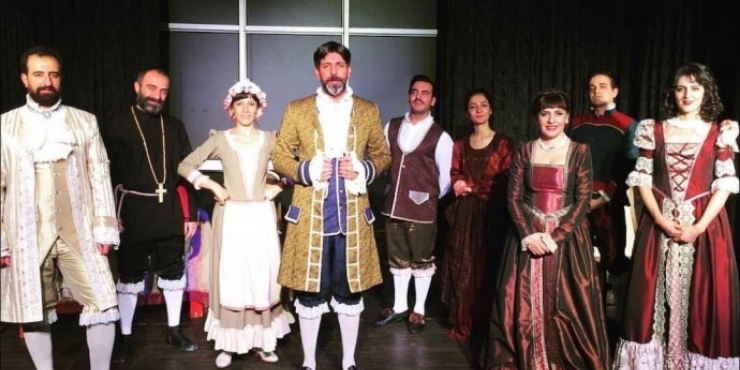 Adana Governor’s Office banned the Kurdish play Tartuffe, which was planned to be staged on 6 June 2022 at the Adana Metropolitan Municipality Theatre. According to the news of the Mezopotamya Agency, an application was made to the governorship for the play staged by Şanoya Bajêr a Amed ê (Amed City Theatre). The governor’s office, on the other hand, banned the play, saying it was “not deemed appropriate.”According to the news, the Governor’s Office decided on June 6 for the application made on June 5, and it was stated that June 6 was written inadvertently.

In the ban decision of the Governor’s Office, “…According to Governor’s Office’s decision dated 03.06.2022 the theatrical play named Tartuffe, which is intended to be performed at the Adana Metropolitan Municipality Theater Hall on 06 June 2022 at 20:00, was not deemed appropriate, with the decision numbered 62837 according too the law 5442”.

On the other hand, it was learned that the Adana Governorate gave permission to the Tartuffe play, which was deemed unsuitable, before the Mersin Governorship, with the phrase “considered appropriate”, but the permission was revoked after a short while. Some of Şanoya Bajêr a Amed ê’s post on the subject on his Twitter account is as follows:

“We planned the tour organization on June 5th in Adana and today (June 6th) in Mersin to bring our Tartuffe play to the audience. We applied to Adana and Mersin Metropolitan Municipalities to rent a hall. Unfortunately, the cultural bureaucrats of both municipalities asked us for ‘governor’s permission’ even though it was not stated in the law.

We could not convince the cultural bureaucrats that it was not right for us to get a ‘governor’s permit’ since the town halls have their own security guards. Despite this, we made a ‘notification’ to the governorships. Although there was no legal problem regarding the content of our play, Adana and Mersin Governorships did not allow our play to be shown due to ‘public safety’. Especially in Mersin, 20 hours before the play, they called around 23.00 on the night of Sunday, June 5, and it is clear that this situation is an arbitrary ban.

Tartuffe, staged by Şanoya Bajêr a Amed ê, was also blocked by the Mardin Governorate on the grounds of a “pandemic” in December 2021.