While reactions to the recent decision to ban the distribution and sales of the book entitled ‘Declaration of the Rights of the Girls in Turkey for ‘being obscene publication’, Buket Uzuner’s book that was initially published 34 years ago was censored too, on the grounds that it could have an adverse effect on the spiritual well-being of children under 18 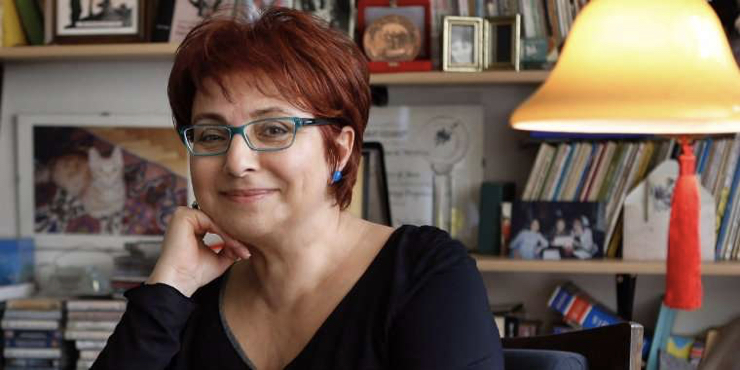 As the world is struggling against a virus, the Sword of Damocles continues to hang over the heads of writers, translators, and publishers under the name of ‘obscene publication’ (muzır neşriyat). The recent decision to ban the distribution and sales of a book entitled ‘Declaration of the Rights of the Girls’ from Yapı Kredi Publications and launch an investigation into its translator was followed by yet another decision. This time, the Board of Protection of Children from Obcence Publications, which operates under the Ministry of Family, Labor and Social Services, examined Buket Uzuner’s ‘The Most Naked Day of the Month’ and decided that it could have an adverse effect on the spiritual well-being of children under 18. The investigation file no. 2018/20969, which had been opened by the Preparatory Office of Gebze Public Prosecutor’s Office was the basis for the decision of the Board which ruled that the book ‘The Most Naked Day of the Month’ be subject to the restrictions set forth in article 4 of the Law no. 1117 as amended by Law no. 3266.

All of a sudden, Uzuner’s book, which came out 34 years ago and was published 19 times, got discovered and censored. We asked the author of the book Buket Uzuner about the recent developments. The interview is followed by an excerpt from a statement by the Turkish Publishers Association, PEN Writers’ Association and Turkish Writers’ Union on Uzuner’s book.

Could you start by reminding the readers what your book ‘The Most Naked Day of the Month’ was about?

The Most Naked Day of the Month is a collection of stories which was published by Boyut Publishing in 1986, Remzi Publishing in 1992 and by Everest Publishing House since 2003. Its 19th edition came out in November 2018.  It consists of some stories I had written in my early youth, in my 20s as well as some that were published in literary magazines at the time. The book has 9 short stories, and the back cover is as follows: ‘‘We all have naked days in our lives; days on which we are defenseless, we do not have any ambitions, we do not resist or try to show off, just like that…Simple, just by ourselves, days when we do not accept anyone or let them in, even those who are closest to us…The stories in this book were written on days which were like that for me, on my most naked days.’’  It is an example of a figure of speech that draws an analogy between loneliness and the nakedness of the soul.

The book includes a story which was later made into a play by TRT (Turkish Radio and Television Corporation); a story entitled ‘Feodor Diye Biri’ (A Certain Feodor) which is set in the Dostoevsky Museum, St. Petersburg; ‘Üç Kişilik Ağıt’ (Requiem for Three) which talks about the loss of a young friend; a story dedicated to the famous philosopher Althusser; the story of a father who grieves the transformation of the Old Galata Bridge, a story about love in early youth entitled ‘Kuşku ve Yerli Filmlerle Büyümüş Kız Çocuklarından Biri’ which was dedicated to Ferhan Şensoy.

The first edition of your book was published 34 years ago. Has the ‘Obscene Publications Board’ just read it? Why are they taking such a decision now?

The Board has also recently ordered that the book ‘Declaration of the Rights of Girls’ be pulled off the shelves.  What is your assessment of the decision regarding your book alongside the wave of decisions which began with official complaints filed by the Ministry of Family and led to books being declared obscene publications and destroyed?

No good can come from acts such as censoring, destroying or burning books. In these times when we, as a nation, are grappling with this scourge called Corona Virus, how will trying to censor a 34-year-old book go down in history?  We all know the answer. There are very significant problems in this country. Those who are paid by the government with taxpayers’ money should be dealing with the real problems we are faced with. For example, they can start by protecting children and youth from drugs or rapists. Books can not make someone immoral. However, they can talk about immoral people and make sure that they are never forgotten.

‘THEY SHOULD NOT WAIT FOR THEIR TURN.’

Your book has already been published 19 times. How was the obscenity decision regarding your book taken? Who filed the complaint which led to the investigation? Do you have any information on that?

What should writers and professional associations do about this wave of censorship?

Censorship is, in its simplest form, a ban that restricts freedom expression.  Censorship, just like any other ban, acts like a boomerang. Not only writers and professional associations but all democratic institutions should stand in solidarity and support each other against censorship. PEN Turkey and the Publishers Association published statements condemning the decision. As Murathan Mungan said in his message of support on social media, “In the face of such an unacceptable decision, all publishers, publisher associations, writers should raise their voice before it’s their turn.’’

Should an Obscene Publications Board even exist? If yes, what should be its functions and composition?

Instead of an Obscene Publications Board, we urgently need a Board which would ‘work towards preventing child rape and impunity for child rapists’.  A ‘Board with a mandate to protect the youth from cartels which sell drugs to them’ would also be extremely useful for our country. Writers are an asset to this country as they present our culture to the rest of the world.

JOINT CALL BY PROFESSIONAL ASSOCIATIONS OF WRITERS AND PUBLISHERS

Turkish Publishers Association, PEN Writers’ Association, and Turkish Writers’ Union published the following decision regarding the statement: ‘‘We call upon the authorities to urgently take steps to prevent decisions regarding ‘obscene publications’, a product of a moralistic and prohibitive mentality that prevents freedom of expression and publication in Turkey and that goes against international conventions to which we are a party’’

“…It is unacceptable to subject a work of art and literary work intended to be read by adults and not by children, which has been published many times to date to an investigation with allegations of obscenity and consider it an obscene publication. Despite the very clear provisions of the Turkish Criminal Code which stipulate that obscenity provisions shall not apply to literary, artistic and scientific works, considering an artistic work as obscene publication and launching an investigation on such artistic work is a clear violation of rights. Administrative units and the judiciary should never forget their obligation to not interfere with the freedom of expression, science, artistic expression and publication, which have great significance for a democratic society.

The fact that a decision restricting a constitutional right and preventing it from being exercised can be taken by five unit heads appointed by the Ministry, constitutes a violation of the freedom of speech, and freedom of expression and publication through science and arts. This is not acceptable in a system that is based on the principle of a democratic society. We would like to reiterate that in its ruling of 26.10.2017 no. 30284 regarding an application filed by Sel Publishing following a court case on obscenity regarding The Soft Machine (Sel Publishing) by William Burroughs in the aftermath of a decision which declared the book an Obscene Publication in 2011, the Constitutional Court ruled that the members of the Board lacked sufficient expertise to assess the concept of literary work, the Board decision regarding The Soft Machine was against the law and that the freedom of expression had been violated.

The freedom of expression is one of the core elements which form the basis of a democratic society as well as a fundamental and indispensable condition for social progress and personal growth.”