In this panel we will refresh our basic knowledge on the artistic freedom of expression – which rights and freedoms it covers, by which means and actors it is banned, what are the relevant national and international laws and mechanisms – and search for answers to the following questions: 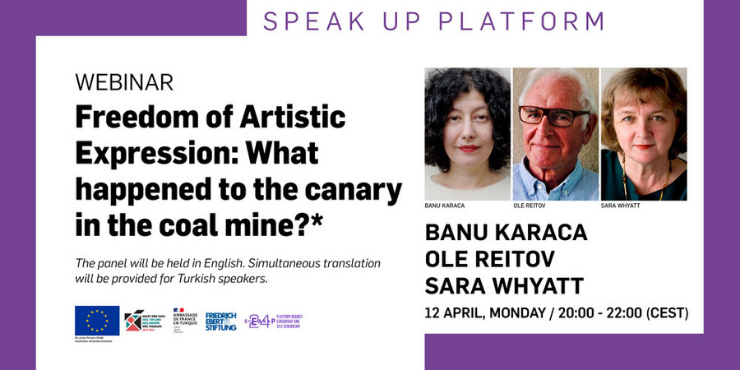 Freedom of Artistic Expression: What happened to the canary in the coal mine?

A year has passed when we observed that artists and artistic production are under threat, and artistic and cultural freedom of expression has been violated increasingly, not only in Turkey, but also on a global scale. We have further experienced how art, artists and cultural professionals are among the first dispensable actors in case of various social crises, in particular the pandemic.

Given that artists are the actors that imply disturbing facts, say the unsaid and make the invisible visible, it is not surprising that they are the first actors affected by the political developments, both in Turkey and globally.

*In the past, a caged canary would be taken down into the coal mine before the miners. If the canary died, it would mean that the mine was dangerous. In other words, the canary was both the first dispensable one and the messenger of an upcoming calamity.

In this panel we organized under the title of the Speak Up Platform, we will refresh our basic knowledge on the artistic freedom of expression – which rights and freedoms it covers, by which means and actors it is banned, what are the relevant national and international laws and mechanisms – and search for answers to our above-mentioned questions.

Banu Karaca works at the intersection of political anthropology and critical theory, art and aesthetics, nationalism and cultural policy, museum and feminist memory studies. Her publications interrogate the freedom of expression in the arts, the visualization of gendered memories of war and political violence, visual literacy, and arts restitution. She is co-editor of Women Mobilizing Memory (Columbia University Press, 2019) and author of The National; Frame: Art and State Violence in Turkey and Germany (Fordham University Press, 2021). She is the co-founder of Siyah Bant, a research platform that documents censorship in the arts in Turkey. She has contributed the Universal Period Reviews of Turkey in 2014 and 2019. Currently a EUME Fellow of the VollkswagenStiftung at the Forum Transregionale Studien Berlin, Banu is continuing her research how looted and dispossessed art has shaped the legal and scholarly knowledge production on art in Turkey and the wider European context.

Ole Reitov is a global human rights defender, speaker, moderator, journalist and independent consultant. In 1999, he co-founded Freemuse,  and acted as Freemuse Executive Director 2013-2017. In this period, he was the Freemuse representative to the UN Human Rights Council . He is a member of the 2005 UNESCO Convention Expert facility on artistic freedom. Coming from a background as a cultural journalist with particular focus on music and cultural policy, he worked globally in for three decades in almost 50 countries for the Danish National Broadcasting (DR). He produced the World Conference on Music Censorship “Music will not be silenced” in Istanbul 2006 and has closely followed several cases of censorship in Turkey.

Sara Whyatt is a campaigner and researcher on freedom of artistic expression and human rights, notably as director of PEN International ‘s freedom of expression program for over 20 years and previously at Amnesty International’s Asia Research Department. At PEN she worked with its global membership mobilising its campaigns for writers at risk as well as on other issues affecting freedom of expression including anti-terror legislation, criminal defamation laws, actions by non-state entities, among others.  In 2013 she took up freelance consultancy, working on projects among them for UNESCO, Freemuse, Culture Action Europe, PEN International, and the International Freedom of Expression Exchange.  In 2019 she was selected onto UNESCO’s Expert Facility advising on its 2005 Convention on the Protection and Promotion of the Diversity of Cultural Expressions. Also in 2019 she joined Columbia University’s Global Freedom of Expression project expert panel.

The panel will be held in English. Simultaneous translation will be provided for Turkish speakers.

Registration for the panel discussion is required through this Zoom link: