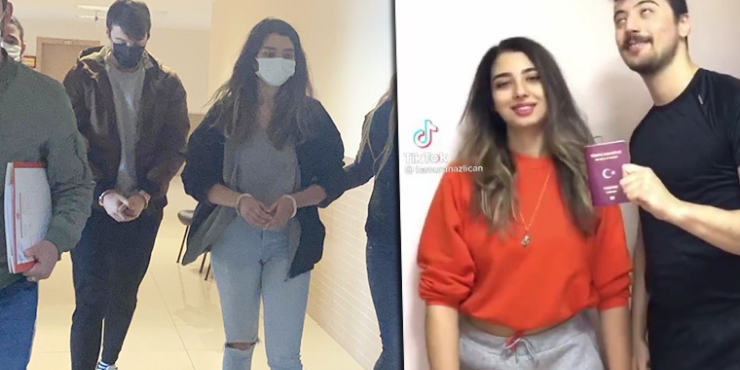 A ban of leaving the country was imposed on K.Ö (23) and N.Y. (23), users of the social networking platform TikTok, who were detained on the grounds that they shared posts that “insult the Turkish passport”. K.Ö. and N.Y were released with judicial review measures after their statements were taken.

K.Ö. and N.Y. used the passport for humor in place of a coaster, oven mitts, and bookmarks in the video they shared in TikTok with the title “where the Turkish passport can be used”.

According to the news reported by Evrensel from Demirören News Agency (DHA), two young people who were detained on April 28 due to the video they shared, were brought to the Anadolu Courthouse. Testifying to the Prosecutor’s Office, K.Ö. said, “We humorously shared this video as it was forbidden to travel abroad during the Corona period. We certainly had no intention of humiliating, belittling or devaluing the passport of the Republic of Turkey and the Turkish Flag. Different people shared our video, without informing us, on other social media platforms than TikTok, as if we were insulting the Turkish passport and the Turkish flag. It caused public unrest. We deleted the video immediately. We do not intend to insult the passport of the Republic of Turkey and the Turkish flag. We love our homeland and our nation. I did not intend to commit a crime”.

The Prosecutor’s Office demanded a ban on leaving the country on the grounds of “insulting the signs of the state’s sovereignty” by referring N.Y. and K.Ö to the criminal courts of peace. The court decided to apply judicial review measures in the form of a ban on leaving the country and reporting to the designated officials at certain times against two young people who are TikTok users.

Similarly, a ban on leaving the country was imposed against a truck driver named Malik Yılmaz after a video he shared on TikTok using the following statements in March 2020, “Stay at home Turkey. How can we stay at home, father? I am not retired, I am neither a civil servant nor rich. I am a worker. I drive trucks. I won’t have anything to eat if I don’t work. I won’t be able to pay my electric and water bills, and my rent. Not paying these is worse than dying. It doesn’t matter if we die of starvation by staying at home by listening to you, or from the virus. But this virus won’t kill me, your order will.