The trial about the case of the restriction decision against four children’s books treated as obscene publications was held on 8th of March. The ministry previously objected to the ‘not obscene’ reports regarding the books prepared by the independent experts. Alican Acanerler from the Speak Up Platform spoke to the lawyer Ümit Erdem who filed the case ongoing since 2019 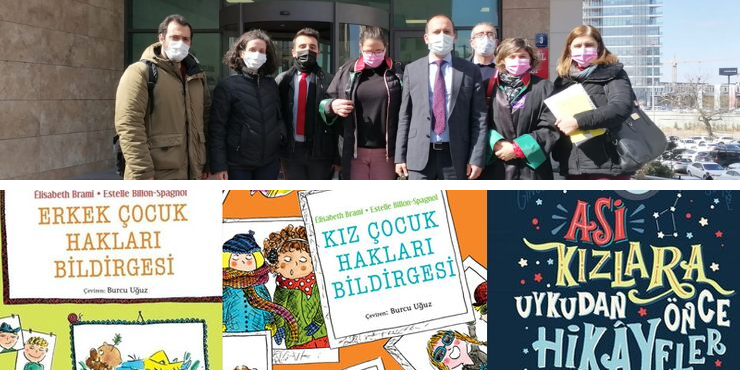 In October 2019, lawyer Ümit Erdem brought to the judiciary the judgment of the Board of the Protection of Minors from Obscene Publications regarding the restriction of four children’s books. The case filed against the restriction (limitation) judgment delivered regarding the four children’s books including the Asi Kızlara Uyumadan Önce Hikayeler 2 (Good Night Stories for Rebel Girls 2), was held at Ankara 12th Administrative Court on 8th  March, International Women’s Day. The Speak Up Platform spoke to Ümit Erdem about the process of the case and for detailed information both about the books which were recently published for girls and declared obscene.

Erdem begins to explain the process by saying that he filed the case right after the obscene publication judgment delivered regarding the books in question, but the Administrative Court should first reject the case and three separate cases should be filed. Erdem applied to the court for each case separately and covered the case expenses himself.

The previous part of this legal struggle which has been lasting for about one and a half years was about the expert reports on the Kız Çocuk Hakları Bildirgesi (Declaration of the Right of Girls) and the Erkek Çocuk Hakları Bildirgesi (Declaration of the Right of Boys) books. According to the expert reports prepared for both books, it was specified that the books did not include “encouragement of transsexuality in children, extremism in violence and gender opposition, obscenity effect on children’s spirituality” as previously stated by the Ministry of Family, Labor and Social Services. The reports prepared many times by the academics who are experts in the field of child’s psychology are in agreement that the contents of the books are not inconvenient.

THE MINISTRY OBJECTS TO THE EXPERT REPORTS

The expert report prepared for the Good Night Stories for Rebel Girls was submitted to the court on 8th March. The Ministry keeps objecting to the reports on the books in question. In its objections, it does not clearly state the reason for the “obscenity” which it had decided before, and it does not justify his objection. On the other hand, lawyer Erdem mentions that the content of such decisions taken by a board whose structure and operation are not transparent is not legal anyway. As in the statements of Erdem on Twitter, the Ministry wants to continue the implementation of the relevant articles of Law No. 1117 with expressions such as “encouraging homosexuality” and “danger of complaining about sexual identity” against the expert findings.

“EVEN THE JUSTIFICATION OF THE MINISTRY IS DANGEROUS”

Ümit Erdem says that it is hard to understand how the clothes of child characters depicted in the children’s books continue to be referred to as obscene by the ministry and adds: “It is actually dangerous to call it explicit for images that are not obscene.” As a lawyer, Erdem underlines that the statements used by the ministry about the images do not coincide with the society and even do not correspond to the universal values of children and that even the statements specified as “justification” by the ministry can be actionable.

Erdem expresses that he was supported by many sensitive parents and publishers throughout the judicial process. Both the publishing house who published one of the books sued and the lawyer of the book’s translator who was sued due to this book helped Erdem. Stating that the Turkish Publishers Association was with him in this process, Erdem mentions that the publishing house that published the Good Night Stories for Rebel Girls brought to judgment the decision taken against the book in question. The judicial process of Hep Kitap publications was closed in December 2020 with the “rejection of the case” decision. Also, the other part showed this rejection of the case decision as precedent at the trial in Ankara on 8th March. It is expected for the Administrative Court to announce the justification of the decision in a month. The fate of the books will be clear then.

“THE OBSCENITY JUSTIFICATIONS OF THE MINISTRY ARE NOT UP-TO-DATE”

Ümit Erdem shares an important detail which he encountered regarding children’s books that were declared as obscene and the cases filed against them while he was researching for the case. In the justifications of the obscene publication submitted by the Ministry; decisions were taken with references to the Law on Protection of Minors from Obscene Publications which was first issued in 1927, and the 1980 and earlier editions of the international disease classification criteria of the World Health Organization (WHO). In other words, decisions that do not comply with the universal values agreed upon today, the conditions of the age, and scientific reality are repeated every time by the board of the ministry.

THE STRUCTURE OF THE BOARD IS NOT TRANSPARENT

There is a point which the Publishers Association emphasizes for the cases of censorship for the children’s books: The structure and the operation of the Ministry board are not transparent. Ümit Erdem says that an academic, a lawyer, and three experts, whose titles were unidentified, were on duty during the case, but that he could only learn during the case. The decision-making processes of the board, which has been under the Ministry of Family, Labor and Social Services since 2018, are not bound by a certain rule. The method of monitoring causing the board to start the processes is a mystery. Finally, in a statement she made in the past months, Minister Zehra Zümrüt Selçuk announced that they have started to work on a reporting line to detect children’s books. Lawyer Erdem emphasizes that the Presidential Communication Center (CİMER) may have been used as a censorship reporting tool.

“IF I READ THIS BOOK, WILL THE POLICE CATCH ME?”

The books which are decided to be obscene can be sold by publishers in a white envelope with the phrase “Harmful for Children”. The books on which a ban and restriction decision have been issued are withdrawn from the market. Erdem states that more than 10 books have been withdrawn from the market in the last few years. As stated in Article 4 of Law No. 1117, it is forbidden to keep the books explicitly on which decision has been issued. Moreover, some of the obscenity decisions published in the Official Gazette stated that the books could only be sold in “black bags”.

Erdem has a seven-year-old child who is a reason for him to file the case. Erdem says it is very difficult to tell a child that the books with a ban decision are now banned. After Ümit Erdem and his family told their children that a book that they read and carried everywhere with him was forbidden, he received this answer: “If I read this book, will the police catch me?”

In one of the three books Erdem shared with the Speak Up Platform, the story of 100 “Rebel” women who lived in history is told in an epic language with the declaration of the rights questioning the traditional roles of men and women. In the visuals of the books titled Declaration, we encounter illustrations of girls and boys in different situations that are frequently encountered in daily life.

WHAT HAVE BEEN HAPPENED BEFORE?

Some of the expressions in the books titled the Declaration of the Right of Girls and the Declaration of the Right of Boys by Elisabeth Brami; Good Night Stories for Rebel Girls, 100 Extraordinary Tales and Nutcracker by Francesca Cavallo and Elena Favilli were declared to “have an obscene effect on the spirituality of those under the age of 18” with the decision of the Board of the Protection of Minors from Obscene Publications dated September 27, 2019. According to the news published on the Speak Up Platform in the same period, the officials of the Ministry of Family, Labor and Social Services cited the encouragement of transsexuality in children as a justification for this decision.