The General Directorate of Security issued a circular banning the recording of police officers. Lawyers highlight that it is a ‘censorship circular’ that protects public officials who commit crimes 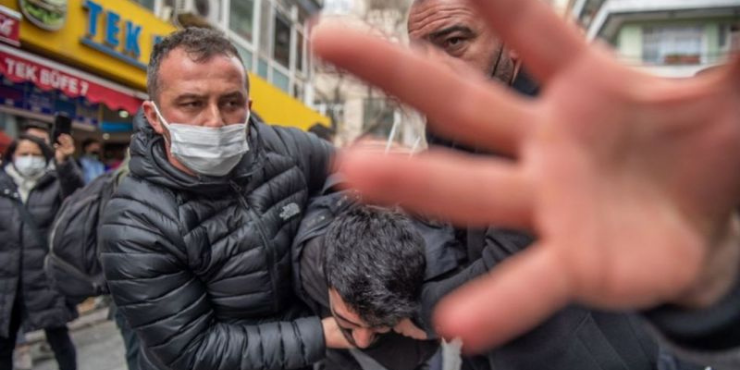 The General Directorate of Security issued a circular banning audio and video recording during social and judicial events. The circular issued before May 1 states that people suspected of recording police officers may be interfered with.

The circular dated 27 April 2021 stipulates that “unauthorized recording and publishing of sound and images of persons shall mean the violation of the right to privacy, one of the most basic human rights, and unlawful processing and sharing of personal data.”

The circular states that audio and video recordings taken in public spaces sometimes “reach to the level of preventing general law enforcement from performing its duties” and are “published on various digital platforms in a way that violates the personal rights or endangers the safety of law enforcement personnel or citizens.”

ATTORNEY TUNCAY KOÇ: “IT HAS NO LEGAL BASIS”

Lawyers who spoke with Meltem Akyol of Evrensel referred to the circular as “a censorship circular that protects public officials who commit crimes.” Underlining that the circular has no legal basis, Attorney Tuncay Koç said: “This cannot be regulated by a circular with no legal basis. People have the right to information and reporting in the public space. In any case, the police or gendarmerie perform public duties, and their duties are public. Any citizen has the right to intervene in and to record every action which involves a crime. Police officers used to have their registration numbers on their helmets to prevent unlawful actions. In this way, citizens would know the identity of any police officer.”

Tuncay Koç concluded his statement to Evrensel with “If there is a crime, the best evidence is a recording of it. This circular is a censorship circular prepared to protect the criminal, especially the public personnel committing crimes, it is meant to censor torture.”

ATTORNEY YAKUP OKUMUŞOĞLU: “A CIRCULAR TO PREVENT EVIDENCE FROM SURFACING”

Attorney Yakup Okumuşoğlu said about the circular: “This circular aims to allow the security forces behave however they want; this is a circular to prevent their illegal actions and behavior from being revealed. This circular aims to destroy evidence and prevent the discovery of evidence. Also, this cannot be regulated by a circular. Do the security forces really have sensitivities about human rights? Just yesterday, the police were stepping on people’s heads during the May 1 demonstrations. Let us document how sensitive the security forces are by recording them. Well, they want to kill us, but they do not want to anyone to talk about it.”

In his statement to Evrensel, Gökhan Durmuş, the Chairman of Journalists’ Union of Turkey (TGS), reminded that 18 journalists faced police intervention during social demonstrations last year and stressed that the circular is a violation of the right to information. Reminding that the security forces perform a public duty to ensure the social order, Durmuş said, “It is not possible to make such an arrangement, which is essentially a violation of the freedom of expression of the press, at the administrative level by a circular. According to Article 26 and 28 of the Constitution, it is absolutely impossible to accept any regulation to this end.”

Recalling that at least 18 journalists were intervened and detained by the police during the course of the action last year, Durmuş continued as follows: “This circular makes it impossible to record any action which involves the law enforcement. This is a preliminary censorship regulation. It is a breach of the Press Law, the Constitution, and international conventions. The press cannot be censored based on the right to privacy of law enforcement officers and the right to protect personal data.”