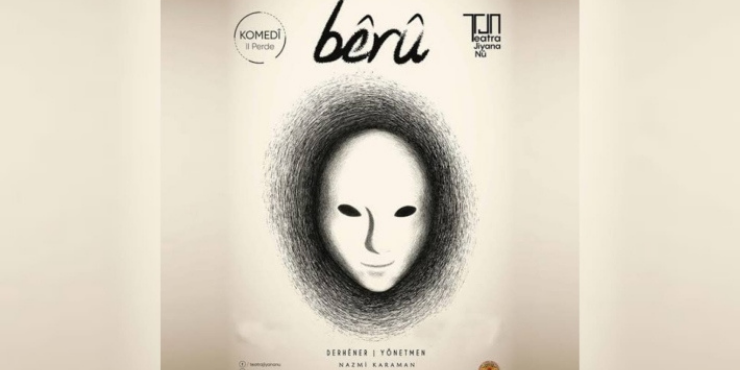 As part of a project to support private theater groups having financial difficulties amid pandemic, the İstanbul Metropolitan Municipality (İMM) City Theaters were scheduled to host “Bêru” (Faceless), a Kurdish theater play, yesterday evening (October 13), in a first in 106 years of history.

However, the Sub-Governor’s Office of Gaziosmanpaşa, where the play was going to be staged, banned it hours before the play. The play and the İMM City Theatres were also targeted 2 weeks ago by the pro-government newspapers such as Aydınlık and Takvim.

Mesopotamia Culture Center’s theatre group Teatra Jiyana Nû, (New Life Theatre) was planning to stage Dario Fo’s play Bêrû (Faceless) in the district when police raided the building hours before the play upon the orders of Gaziosmanpaşa District Governor’s Office on Oct. 13. Police ordered the actors to sign a document about the ban, but the actors rejected to do so.

Sharing information about the name of the theater play and that of the theater group as well as when and where the play was to be staged and as part of what project, the decision of ban has indicated, “As per the Article 32/ç of the Law no. 5442 on Provincial Administration, it is among the tasks and duties of the Sub-Governor to establish peace and security, to ensure security pertaining to personal immunity, to maintain public welfare and to use preventive law enforcement authority. It stipulates that the Sub-Governor shall take the necessary decisions and precautions to ensure them.”

After referring to the above legislation, the Sub-Governor’s Office has moved on to say that “the theater planned intended to be performed has been considered to disturb general public order.”

Municipal Theater General Manager Ceyhun Ünlü slammed the decision, saying that “the days that art can be performed freely will come.” “This doesn’t mean that we will be silent,” Ünlü said. Actors Rugeş Kırıcı and Ömer Şahin released a statement in Kurdish and Turkish. “We can’t perform because they said that we threaten public security, but these stages are our rights. We will perform. We will continue to protect our theaters and language,” they said.

İstanbul Governor Ali Yerlikaya, meanwhile, said that the play was banned not because it’s Kurdish, but it includes Kurdistan Workers’ Party (PKK) propaganda. “A legal process was launched on the issue,” Yerlikaya said.

A harsher statement came from Deputy Interior Minister İsmail Çataklı, who said that “PKK propaganda won’t be allowed regardless of its language.” According to Çataklı, to say that the play was banned because it’s Kurdish is ‘provocation.’ “A new provocation and lie. Kurdish theater is of course allowed,” he said. “Necessary legal procedures were launched into those who allowed the play,” he added.

“It’s allowed for a terrorist group member who is sought with a red notice to make a statement on TV, but it’s banned to stage a play in Kurdish. This is unacceptable,” İmamoğlu told reporters on October 14, as he also criticized Çataklı’s remarks on the play including PKK propaganda.

“This play was staged in various parts of Istanbul 20-30 times. Where were you until today?” he asked.

After the İstanbul Metropolitan Municipality (İMM) City Theaters announced to support private theater groups amid pandemic and the TJN applied with two theater plays. “Bêrû” (Faceless) by Dario Fo from Italy was approved by the İMM City Theaters and it was planned to be staged in Gaziosmanpaşa Theater Hall of the City Theaters.

Translated into Kurdish by Dilawer Zera, directed by Nazmi Karaman and performed by Rugeş Kırıcı, Ömer Şahin, Rewşan Apaydın and Cihat Ekinci, this theater play would have marked the first Kurdish theater play to be staged in the City Theatres in their 106 years of history if it had not been banned by the sub-governor’s office.