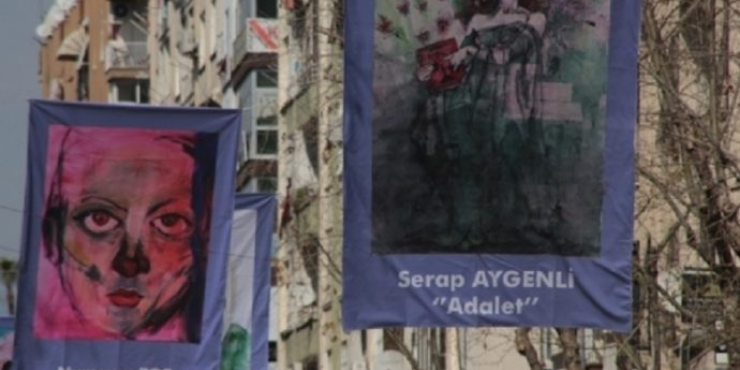 “Melekleri Öldürmeyin” (Don’t Kill the Angels) exhibition prepared by Mersin University Plastic Arts Society in memory of the murdered women was opened on March 8, International Working Women’s Day. Works of 104 artists from different countries were exhibited in the exhibition organized in cooperation with Mersin University and the Metropolitan Municipality. According to Mersin İmece Haber, the exhibition was attacked by unidentified people on March 11. The organizer and curator of the exhibition, Prof. Dr. Nurseren Tor emphasized: “There was a planned attack on our exhibition. We will file a criminal complaint”.

“WE CONDEMN THE MURDER OF THE EXHIBITION OPENED FOR INNOCENT PURPOSES”

Regarding the details of the incident, Nurseren Tor said, “A few artifacts that could not be hung with the fire brigade were exhibited between 21:00 and midnight yesterday. Every evening, the beginning of the exhibition was waited until late and any technical problems were corrected with the firefighters. It was seen that the works were not in place this morning. When I came to the exhibition upon the statement of the tradesmen, I saw that there were only 11 paintings remained here”. In a statement made to the local newspaper, Tor reacted by saying that “Plastic Arts Club aims to popularize art, to bring art together with the society, to make qualified works and to motivate young people and artist candidates who graduated from our faculty in the employment of artists under its mission. I condemn the painful murder of this exhibition, which was opened for such innocent purposes”.

MURDERED WOMEN HAD BEEN MEMORISED

The international exhibition, which was planned to be organized as an open-air event on Hastane Street between March 8-15, was realized by printing high-resolution photographs of the artists’ productions on the subject and hanging them on the carriers mounted between the electric poles on the street. Nurseren Tor, who made a press release about the exhibition on March 5, said that the news of the murdered women from Mersin is read every day, but that these women were killed not only in Mersin, but also in the country and many parts of the world. She said “We hear the screams of women who were not even in the press, who were just killed and traces removed. I do not know if the traces are removed, or whether these traces carry children or mothers as destiny …

For all these reasons, we will open our exhibition “Don’t Kill Angels” on the occasion of International Women’s Day, in memory of these ‘Angels’ (women killed in Mersin and women from Mersin) who were killed, tortured and humiliated for whatever reason.”